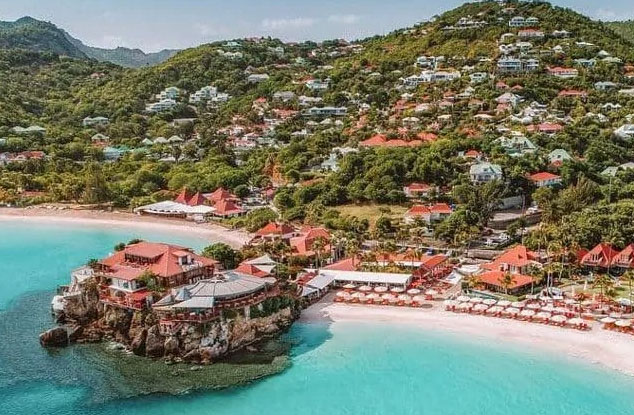 Things to do in St. Barts Travel Guide: St. Barts, also known as St. Barth, St. Barths, or Saint-Barthelemy, is the vacation destination of choice for famous people from Hollywood and other parts of the globe. But if you put some thought into it, even luxury-goods fans with a limited budget may do it if they plan ahead.

This volcanic island may be found in the French West Indies, about 35 kilometers to the north of St. Kitts and 22 miles to the southeast of the island of St. Martin.

I’ve previously brought up the fact that sophisticated tourists often visit St. Barts because of its reputation as a posh Caribbean destination.

Since it is warm throughout the year, the weather is not the most important aspect to think about when planning a trip to St. Barts; yet, the island does experience a variety of different seasons.

The busiest time of year for tourists is from the end of November to the beginning of January. The prices of hotels and airfares are much higher than normal, and some accommodations demand guests to book a minimum stay of two weeks during the Christmas season. Even though the peak season doesn’t end until February, costs are still much higher than they are outside of the Christmas season.

The months of March and April continue to experience increased prices as a result of events such as Easter, spring break, and several regattas, one of which being the annual St. Barths Bucket Regatta, which takes place every March. St. Barts is a wonderful place to go on vacation in the months of May and June since there are still many tourists there, but the crowds are less and the prices are not nearly as exorbitant.

In addition to this, it is not during the hurricane season, which starts in June. Even though the chances of a hurricane occurring during the summer are significantly smaller than they are during the rest of the year, there is still a possibility that your plans may be disrupted by the formation of a storm. Hurricane season runs from June to November.

If you are not concerned about this, then it may be a wonderful time to visit St. Barts since you will find that prices are lower and there are less tourists there. Take note that throughout the months of September and October, several sites will be closed for seasonal maintenance. The end of summer is often when St. Barts experiences most rain, while the months of November through April are the driest on the island.

The land area of St. Barts is just 9.7 square miles (25 square kilometers), making it slightly larger than Los Angeles. It is possible to see the whole of the island in a single day.

St. Barts is a steep and verdant island.

It is sunny in St. Barts for an average of 300 days every year.

The Euro is the currency that must be used on the island, although the US Dollar is very widely accepted wherever you go.

In St. Barts French language is used however, English is also extensively used.

Scuba diving is another activity that ranks highly among the best things to do in St. Barths, as it does on many other islands in the Caribbean.

Kayali is a well-known destination for scuba divers interested in exploring shipwrecks. The wreck of this trawler, which went down in 1994, may be found at a depth of less than 100 feet (30 meters).

Only experienced divers should participate in this excursion, despite the fact that it is one of the safest shipwreck dives in the Caribbean.

You can’t take a vacation to the Caribbean and not take advantage of the region’s renowned white-sand beaches.

St. Barts is home to a total of 22 beautiful beaches.

And many people believe that the beaches of St. Barts are the greatest in the whole Caribbean.

In addition to this, they include large stretches of white sand beaches and warm, blue waters. The environment is also a joy to look at; the majority of the beaches are encircled by breathtaking sceneries consisting of thick vegetation and hills.

See also  Things to do in Atlanta Travel Guide

This pristine beach is inaccessible unless one travels there by boat or makes their way down from the main road on foot.It may take up to half an hour on foot, but the beach, with its gin-clear water, secluded areas, and many trees, is well worth the effort. Hiking to Colombier Beach is one of the most enjoyable activities to do in St. Barths, especially for those who want an element of excitement in their vacations.

When you visit St. Barts, you just cannot avoid spending lavishly. When it comes to yacht chartering, the Caribbean is one of the best places to go. Renting a yacht, motorboat, or catamaran is an absolute must if you have the financial means to do so.

Sailing is the most iconic thing to do in St. Barts because of the numerous beaches and coves that can only be reached by boat. Sailing is also one of the best ways to explore the island.

Best Hotels in Things to do in St. Barts Travel Guide

A five-star choice with stunning views of Gustavia and the marina can be found at the newly built Hôtel Barrière Le Carl Gustaf. A good number of the rooms also come equipped with private outdoor plunge pools, which put guests in prime position to take in some of the most breathtaking panoramas the island has to offer.

There is a good reason why Eden Rock is considered to be one of the most well-known hotels on St. Barts. Royalty and A-list celebrities from Hollywood are drawn to the luxurious accommodations, which are located on St. Jean Bay, which is known for its beautiful vistas. Because each of the rooms, suites, and villas has its own distinct design, no two stays will ever be exactly the same.

Although Le Barthélemy is situated on Grand Cul-De-Sac Beach, the hotel’s pool and the many other ways guests may be pampered come close to competing with the beauty of the natural setting. Le Barthélemy provides guests with a comprehensive resort experience in one stylish package by providing a variety of eating choices, a spa, as well as gorgeous suites and villas.

You are going to want to call ahead and make a reservation at Orega in order to take advantage of the cosy ambiance and mind-blowing delicacies that can be experienced at this French and Japanese fusion restaurant. Attend a dinner party, and be ready for the most delectable supper of your life.

The climate of St. Barts is consistently tropical and rather warm throughout the year. There are two “seasons“: from December through May, you may anticipate temperatures that are a little more moderate, and from June through November, the temperature tends to be higher.

During the Atlantic hurricane season, which lasts from June to November, there is a chance of hurricanes, particularly in the months of September and October. In 2017, Hurricane Irma inflicted major damage onto the Caribbean island of St. Barts.

The following is a list of each month’s typical low and high temperature measured in Fahrenheit. It rains around 40 inches per year on average, and the months of August through November are often the months with the most precipitation. You may anticipate eight to nine hours of sunlight each and every day, regardless of the month.